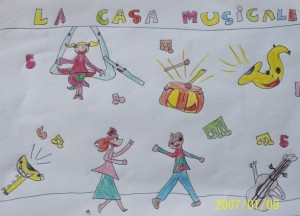 Mariolina Rossi obtained her degree in Musical Therapy at the “la Linea dell’Arco” school (LC). Before moving to Perugia she was based in Milan, where she worked with handicapped people (AGEHA Association for the development of cognitive processes in people with Down Syndrome, Autism) and people with psychological issues. She worked it the gynecological department at the hospital of Saronno, where she prepared over 1000 pregnant women for childbirth. In her courses she focused on how to raise the threshold of pain and the mother- child relation after the delivery.

Lorenzo Capolsini obtained his degree in pedagogy at the University of Perugia and graduated from the CEP- Pro Civitate Christiana” school in Assisi, where he studied music therapy. He currently works with children with social issues and holds seminars preschool teachers in Perugia.

Furthermore, he works as a Music Therapist at the “Centro di  Speranza –Fratta Todina (PG).

In 2007 the two of them started the “Nonsolonote Project” in the department of pediatric oncohematology at the Hospital “Santa Maria della Misericordia “ – Pg.

They are part of the multidisciplinary staff of the department; which they have represented at various conventions such as the VIII Congress of Musial Therapy 2010 in Cadiz, Spain and the AIEOP Convention 2011 in Perugia., Italy. They also hold workshops in

We also collaborate with the following people:

Maria Teresa Palermo: musician and music-therapist, she is a member of the Italian Association of Music-therapy Professionals as well as an instructor thereof. She extensively dealt with musical didactics and music-therapy application concerning mentally disabled people (autism and cognitive retardation) and people suffering from dementia. She took part to ReMus, an international research project which demonstrated the efficiency of learning mechanisms in improving the reading skills of children afflicted by developmental dyslexia (http://www.fondazione-mariani.org/it/newsletter- 5-ott-2015/remus-risultati-plus-one.html). She is currently working as a music-therapist at the “S. Maria della Misericordia” hospital in Perugia at the hematology and bone marrow transplant wards.

Designed by illuminatheme.com. Powered with WordPress